Once every two years there is a huge international laboratory trade fair in Munich, Germany. This is called “Analytica”.

Analytica is attended by many manufactures from all over the world, end users, and laboratory supply companies looking to discuss products and ideas with their suppliers.

For the team at Asynt it has always been a good event to catch up with many of our key suppliers and indeed for us to meet with our own international distributors so several of our chemists made the journey to Germany last week. 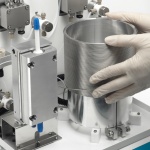 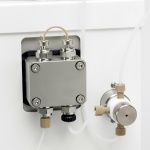 Arran, Kerry and Martyn joined Sho-san, Yohei-san, and Rie-san – our friends and business partners from BioChromato, on their stand. Between them they gave many demonstrations of the incredibly popular Smart Evaporator and the NEW DrySyn Spiral Evaporator which the teams have been working on together. We were able to catch up with many of our international distributors for ReactoMate, DrySyn, PressureSyn and CondenSyn; also giving them an insight to some of the new developments that we are working on now for later this year.

There were a huge number of manufacturers present at the fair and the team were thrilled to find some very interesting new products that will be useful to a wide range of our customers and indeed we are most excited about some of our key suppliers upcoming offerings.

The team met with various key partners during the evenings, of course being in Munich it seems that Sausages, Spagel and Beer were popular at these gatherings!

So do watch this space, with our own developments and our suppliers new product lines then we should have many new products to tell you about as the year unfolds further.