It’s easy to speculate that the gadgets we see in movies that were for seemingly impossible science and technology have inspired the production of very real processes and apparatus.  Communication devices on vintage Star Trek episodes become state of the art mobile telephones, scanners detect faults within the human body, droids and bots both with or without artificial intelligence are now sent into hazardous situations and drones fly through our skies without anyone thinking anything of it!

We found a great article detailing quite a few Star Wars “things” that are now entering reality:

Personally, whilst I find all of these really interesting and some of huge potential significance, what I’d really love to see is the machine from the 2013 Matt Damon film, Elysium, brought to life. The idea of combining the necessary technology with both biological and chemical sciences to this degree blows my mind.  Is it likely to ever be possible?  If you haven’t seen this movie, the machines I’m talking about look something like a CT scanner but once they’ve scanned you they then fix whatever is wrong – correcting tumours and blood ailments, repairing broken bones, and making the body like new. Maybe one day…!

The other aspect of this blog is to think about how far we have come already though. Look at those Star Wars features we can now actually use and then look at how our laboratories used to be – really not that long ago!

Cambridge chemist J J Thomson (1856-1940) made an unexpected discovery. The degree of deflection depended on the mass of the particle, but he found that neon produced two traces, rather than one. This suggested that the element was made up of two different kinds of atom which were chemically identical but had a different mass. Today these are known as isotopes.  Thomson took on a student, Francis William Aston (1877-1945), who after the First World War constructed his first mass spectrograph, an instrument that can measure the masses and relative concentrations of atoms and molecules in a sample.

As he improved his mass spectrograph Aston succeeded in identifying 212 of the naturally occurring isotopes.  He was awarded the Nobel Prize for chemistry in 1922.  This image shows Francis William Aston, English chemical physicist, c.1920s. in his laboratory (Science Museum/ Science and Society Picture Library).  Can you imagine working in that space today? 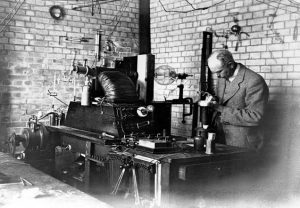 Francis William Aston (1877-1945) worked with J J Thomson (1856- 1940), at Cambridge University. In 1919 he devised a mass spectrograph which was able to separate atoms of similar mass. With it he showed that not all atoms in a chemical element are identical. Aston identified the isotopes of over 50 elements. He was awarded the Nobel Prize for Chemistry in 1922.

I found a similar style of laboratory from MIT in the USA which I believe is from the roughly the same time.  There’s little in the way of safety apparatus or clothing that I can see and the space looks pretty basic!  Don’t you feel lucky to have lovely accurate modern equipment? The level of accuracy even on something as basic as a Hotplate stirrer kit would be quite shocking to these chemists I suspect!  I wonder how any kind of scale up was achieved with any real continuity?  How accurate were their balances? Am I wrong to suspect that something like a three decimal place balance just didn’t exist?

So we thank our lucky stars for all the scientists and engineers working hard to give us the best tools and the best chemistry and just imagine what the next hundred years might bring!  Maybe the next Star Wars movie will give us more inspiration?
Share