Home » News & Media » Have you joined the sour crowd?

With so many people spending a lot more time at home than they’re used to, many have taken up baking as a hobby.  With National Baking Day last weekend, the internet was full of baked goods (and so was my kitchen!). Despite the short supply of flour and yeast, it’s bread making that has been the lock down phenomenon with sourdough bread taking the number one spot! 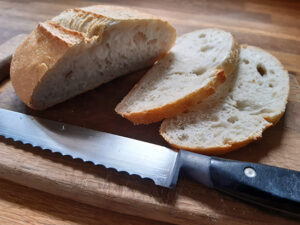 Unlike “regular” bread, sourdough differs because it doesn’t use the normal yeast we’re accustomed to as the raising agent.  By mixing flour and water, and exposing it to the air, the organisms that colonise the resulting concoction is almost always composed of a small handful of microbes that can leaven bread.  This combination of bacteria and wild yeast from the air lives in a bubbly and sticky, acidic mix which is called a starter.  It’s not quite as simple as it sounds though, as multiple celebrities as well as us non-famous people have discovered and shared via social media!

The BBC Good Food website has a guide we can follow to produce this starter, but even with instructions it doesn’t always work out as far as we can see!  I do love that so many people have given their starter a name though! 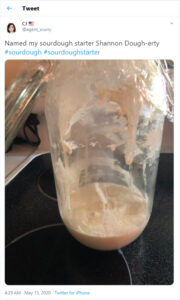 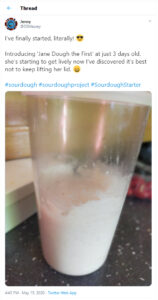 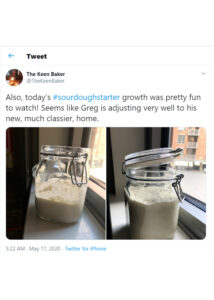 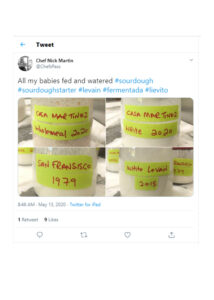 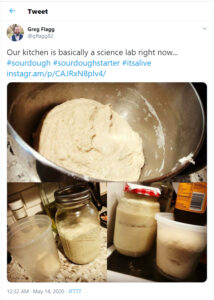 So what actually is this starter? While most shop-bought bread is made using one of a few kinds of wheat and only a single species of yeast, many bakeries and home bakers continue to make new starters and keep old ones alive, resulting in a very wide spectrum of tastes. Nearly all traditional leavened bread tastes at least a little bit sour and this sourness is often due to the same bacteria found in yogurt, but more than 60 different lactic acid-producing bacterial species and a half dozen species of yeasts have been found in one or another starter from different bakeries in different places. No one really knows why there are so many variations.  A sourdough starter, also called levain, is basically fermented dough filled with natural, wild yeast and a bacteria called lactobacilli. 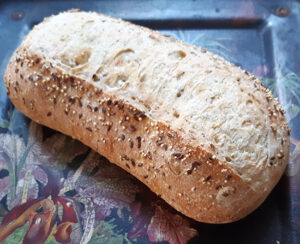 I did some hunting around the internet to see if I could find out more and came across a fantastic article written a couple of years ago which reported on a study made by Biologist, Rob Dunn, who wanted to find out how diverse the starters actually are and how they’re affected by our immediate environment, and even the bacteria on our own hands.

To examine the mystery of why starters differ so much, the team at my lab decided to conduct a study with two parts. In the first part, we’d have 15 bakers from 15 countries make the same starter, using the same ingredients, where the only factors not controlled would be the bodies of the bakers and the air in their homes or bakeries. We’d test a hypothesis that the microbes on the bodies of the bakers and in their homes and bakeries would influence the microbes in the starters. In the second part — a survey — we would characterize the microbes in starters from around the world.”

The results of each bakers efforts really were different, not only in the way that they handled the dough and produced the loaf, but in the very taste, smell and texture of it.  If you’ve got a few minutes to spare I recommend reading the article! You can find it here: https://ideas.ted.com/inside-the-fascinating-and-delicious-science-of-sourdough-bread/

It goes to show though, that the method of introducing ingredients to any reaction we wish to take place, can have a significant impact.  Choosing the means of heating or stirring, of the pressure rating we work under, of how we actually make additions or subtractions can subtly (or drastically!) change the outcome.

As scientists we need to strive for continuity in our work to ensure accuracy and that our results can be reproduced, and of course scaled-up.  This is emphasised in our efforts to assist laboratories around the world in finding the perfect tools to carry out their work on any scale, from little to large! You can find out more about this via the “Asyntise” section of our website showing a few case studies.  Contact us if you’d like to discuss your own scale-up project – our chemists would love to speak with you!

Sources:
Inside the fascinating (and delicious!) science of sourdough bread – by Rob Dunn & team.
https://www.acouplecooks.com/how-to-make-sourdough-starter/