If you’re experiencing summer here in Cambridgeshire in the UK where Asynt head office is, you’ll know that we’re not getting a huge amount of sunshine yet but it’s warm and muggy enough to give us an excuse to indulge in everyone’s favourite calorific summer treat; ice cream.

We haven’t managed to convince Martyn that an in-house ice cream manufacturing station with a liquid nitrogen generator is a reasonable staff facility, but we did find that the cooling DrySyn SnowStorm Reactor Kit is really wonderful at holding* several of these chilled treasures at a low temperature until we’re ready to eat!  We might possibly need more space for sauces, toppings and proper ice cream cornets though… 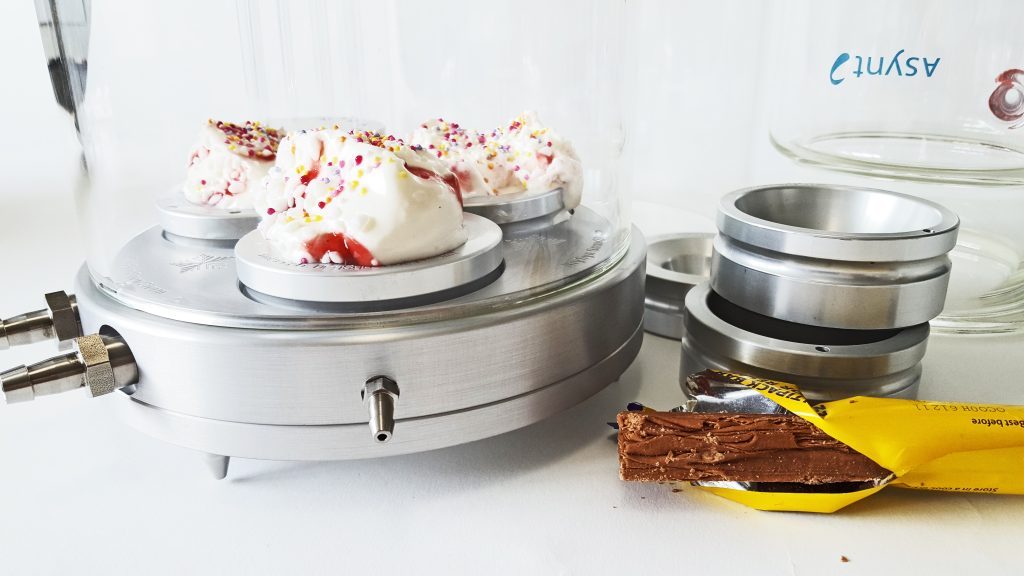 I have had a try at making a very sad, low fat, ice cream alternative at home with fat-free greek yoghurt and frozen berries but it lacked the pzazz of Ben and Jerry’s “Phish Food” (other brands are available!).  I tried to find out more about the chemistry behind this fine food that is the beloved friend of both the hot and sweaty and of the heartbroken…

A “proper” ice cream is made up of a combination of air, ice crystals, fat globules (yum!), and a liquid syrup.  Combined they make a colloid or solution with very small insoluble particles suspended in it. I was surprised by the proportions of this structure, expecting the vast majority to be fat droplets followed by the syrup but actually the bulk of our favourite pudding is made up of nothing but air bubbles! A huge 50%!  This is followed by 30% air crystals, 15% liquid syrup, and only 5% fat droplets. I feel vaguely cheated!

The fats are really important for the creamy taste of ice cream.  Proteins from milk form a membrane around the fat droplets, making it harder for them to come into contact with each others. Emulsifiers replace some milk protein on the surface of the fat droplet. As ice cream is made, some of the fat in the droplet solidifies, and the fat ‘needles’ that form help droplets to partially cluster.  The clusters, along with the milk proteins, help stabilise air bubbles in the ice cream.

Natural ice cream flavours contain a number of flavour-contributing compounds but these are often achieved artificially instead.  There are loads of compounds which can be used as flavour enhancers but the one I wish I hadn’t found out about is skatole – also found in faeces, but which has a floral odour at lower concentrations!  Colours can also be added artificially; anthocyanins from plants are among the common colouring agents used.

Typically the ice cream we buy from our shops have added stabilisers in very small quantities.  Often these are extracted from plants with a common example such as socium alginate, the sodium salt of alginic acid, which is extracted from brown seaweeds.  These stabilisers reduce the rate at which ice cream melts (not an issue at my house!), add smoothness, and increase the viscosity of the liquid phase of ice cream.  Use of multiple stabilisers can produce a more pleasant ice cream, bringing the whole experience together beautifully!

So now I know a little about the chemistry of ice cream (with thanks to Compound Interest for their informative illustrations and info) I’m a little bit sadder about it’s physical make up but no less inclined to indulge! Pass me the salted caramel sauce and the wafers, won’t you please?  If you want your own Asynt ice cream station with liquid nitrogen generator and cooling DrySyn just get in touch!

*Ours is brand new, clean, and untouched by any chemical substances. We wouldn’t recommend using yours in the lab this way!