With summer finally in full swing here in the UK we couldn’t resist sharing this fun summer chemistry.

Ice that actually glows in the dark is surprisingly easy to make;  Just tip a bottle of tonic water into an ice cube tray, leave it in the freezer for a couple of hours and that’s it! 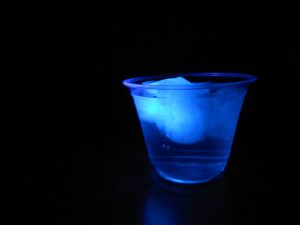 Tonic water glows bright blue under a black light – The glow is also activated by other sources of ultraviolet light, such as fluorescent lights or sunlight, although the glow won’t appear as bright because the room won’t be quite as dark. If you want to duplicate the effect in the photo, you just need a black light somewhere in the room with the ice.

The active ingrediant in the tonic water that makes the chemistry-magic is called quinine so just make sure that whichever you buy to try this with contains that ingrediant and it should work.  It doens’t make any difference if it’s a full calorie or a diet tonic water, but if you mix the tonic water with regular water the ice cubes will last a little longer than if they’re made with only tonic water as this melts faster on its own.  Unless making your glow in the dark cubes to go in a drink you would naturally mix with tonic water then it would probably taste better to mix it with some kind of lemonade rather than regular water!

Another tip we discovered online is to make your drink in a clear plastic beaker as these are usually brightly fluorescent under black light, so you get an extra big glow if you use them.  We’d love to see your photos if you try this out!