There’s an amazing smell in the air after heavy rain in summer – and even a recognisable scent when a big storm is brewing.

These smells can mostly be attributed to three major compounds – bacteria in the earth, oils released by plants during dry weather, and electrical charges.

Bacteria is the main culprit.  Actinomycetes in the soil produces geosmin and secretes it into the soil where it is disturbed by the rain.  This causes it to spread through the air where we can smell it.  It takes on a tiny amount airborne for us clever humans to detect it – around a teaspoon in 50,000,000 litres.

Second in line is the oils from plants.  These are collected in soil and rocks until the rain falls and causes a range of smaller, volatile compounds in them to be released.  They mix with the geosmin in the air causing “petrichor” which is the official name attributed to the smell after rain!  Scientists labelled this back in 1964 – something I never knew!

The heady and foreboding smell before rain has a completely different story though.  Much of this is a result of the electrical charge present in the atmosphere which causes some oxygen molecules to split into individual atoms.  These combine with other oxygen molecules in the atmosphere and form ozone (O3) which has a bit of a stink, often compared to chlorine, but it’s pretty unstable down here.  Far happier much higher up, the wind produced by a storm can push it down to us where we can smell it.

Compound Chemistry have a great infographic that breaks this down: 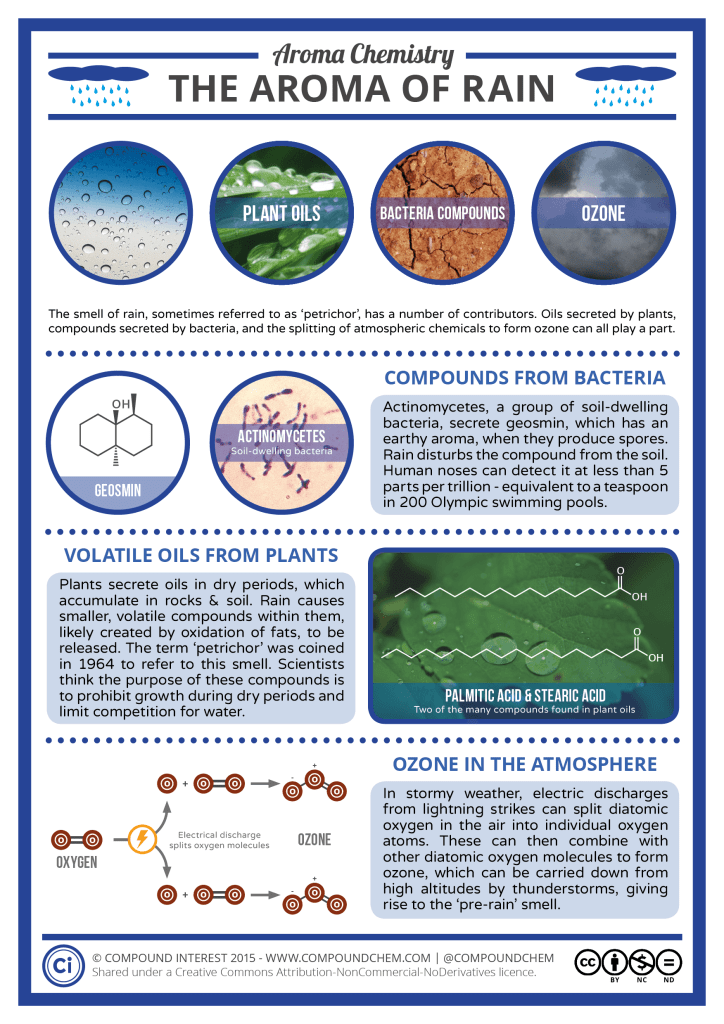 The Asynt Team is growing