With the approach of Spring time giving both those with allergies and those with asthma many worries and considerations, we found this recent article on the RSC Chemistry World site particularly interesting:

Scientists based in the US have devised a new way to make Montelukast, a drug used in the treatment of asthma and seasonal allergies.

Asthma is a chronic inflammatory disease of the airways which affects up to 300 million people worldwide and caused 250,000 deaths in 2011. Although there is no cure for asthma, symptoms can be managed through the use of fast-acting medication to treat acute attacks, and long-term control achieved using inhaled corticosteroids, sometimes in conjunction with a leukotriene antagonist, such as Montelukast.

The synthesis of Montelukast, reported in 1993 by scientists at Merck, involves 10 steps. The more steps required to manufacture a drug, the more costly and time-consuming the process becomes. Shorter, more efficient drug syntheses are therefore highly sought after by pharmaceutical companies. 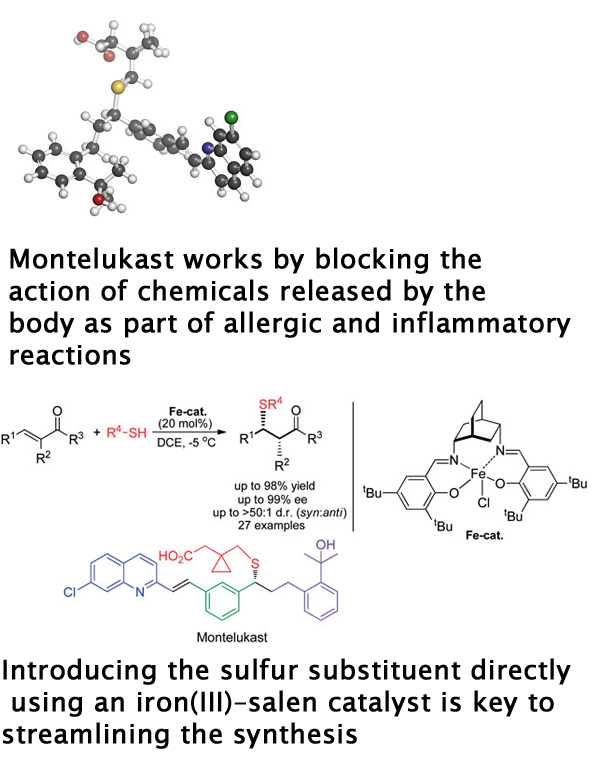 James White and Subrata Shaw at Oregon State University have developed a new synthetic pathway to Montelukast, in which the drug is prepared in only four steps. Their synthesis is more efficient than the Merck route as the latter introduces the sulfur substituent indirectly and non-catalytically via a displacement reaction. White and Shaw incorporated the sulfur substituent directly via an enantioselective sulfa-Michael reaction using an iron(III)–salen catalyst.

Daniel Seidel, an expert in asymmetric catalysis at Rutgers University in the US is particularly impressed by the broad scope and high enantioselectivity and diastereoselectivity of the iron(III)–salen-based reaction, describing it as an excellent general solution to a challenging problem.

White hopes to use the bicyclic scaffold that forms the chiral centerpiece of the salen-metal complexes as a template to formulate asymmetric catalysts for other transformations including cyclopropanation and the Conia-ene reaction.

The original article can be found HERE
Written by Eleanor Merritt