Home » News & Media » Veganuary: the hidden story of vitamin B12

As we move in to a new year, many of us feel as though we should be striving to somehow better ourselves or make positive changes in the way we live.  A popular trend for January in recent years is to “do Veganuary” which means follow a vegan diet for the month.

For those who don’t eat this way normally but are determined to do so at least for the month, Veganuary can be complicated.  Many things we eat and drink don’t obviously include animal derivatives but they’re there if you look carefully.  My dad went from being what the family described as the ultimate carnivore to spending a year as a vegetarian before living as a vegan for the rest of his life.  There were things he missed that as a vegan which he would no longer enjoy but he maintained that he felt much better for it in addition to the obvious prevention of animal cruelty and potential environmental impact.  I think the only thing he was really sad to cut out was an annual bottle of port shared with his brothers at Christmas – they made sure they enjoyed the final year with it though!

If you look at Veganuary from another angle – what you need rather than what you’re cutting out – you may wonder what originally animal derived components that someone who eats a vegan or vegetarian diet actually needs to maintain a healthy mind and body and which they can find difficult to get from their food.

Everyone knows about protein and calcium, right?  If you’re not eating meat, poultry, fish or dairy, then you’re going to be making sure that you have plenty of pulses and beans.  BTW, did you know that one of the side effects of not getting enough calcium is to develop an awful temper?  Something to watch out for if you or a friend is doing Veganuary.

The hidden vitamin to watch out for in Veganuary

The thing that surprised me about following a vegan diet was that you need to watch out for vitamin B12.  It isn’t something that gets talked about much, and it may be surprising to know how difficult it can be to get it from your food – even for non-vegans. Historically, we would have got this from meat and animal products or from root vegetables.  Certain microbes work to naturally enrich those vegetables with B12, but fertilization with animal waste as part of a naturally recycled ecosystem would also do this.  With the invention and widespread use of artificial fertilisers it’s now virtually impossible to get the vitamin in this way meaning that vegans in particular need to take supplements.  Without enough B12 you can suffer potentially fatal problems. 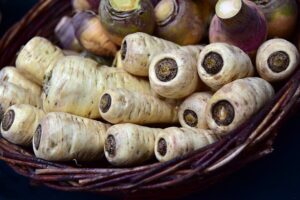 What is vitamin B12?

It’s a molecule with a metal called cobalt, Co. at its centre.  The Vegan Chemist describes this as:

The Co is bound to an organic molecule (meaning, carbon-based) known as a ligand, and this ligand attaches to the Co through six “donor” atoms to produce six cobalt-atom bonds to the organic ligand. These six atoms arrange around the Co in what is referred to as an octahedral geometry. This is the shape you obtain if you take two pyramids and place them together base to base, where Co would be at the center of this diamond-like structure. Here, two of the atoms arrange themselves at the top and bottom of the Co, like the north and south poles are to the Earth. We call these the axial atoms and bonds, and these are able to be pushed aside and replaced with other molecules as needed.

It is this action that allows B12 to attach to other molecules in our body to provide its critical biological function. The remaining four atoms arrange themselves in an “X” formation around the equator of our metal, hence we refer to these as the equatorial positions. Two of the atoms point toward you from the equator of the metal, while two face away from you, behind the metal.

These atoms bond very strongly to the metal, anchoring it in place within the scope of the overall molecule. Without the strong bonding these four atoms provide in B12, the Co metal would easily release itself from the ligand, acting as a “free” metal ion.

While Vitamin B12 at proper concentrations is essential to human life, free cobalt ions are dangerous. Cobalt poisoning can give you heart problems, deafness, nerve problems, tinnitus, thickening of the blood, thyroid issues and problems with your vision.  It is incredibly rare however.  Working as a catalyst, or a cocatalyst, vitamin B12 helps kick start certain enzymes in our bodies for biochemical reactions necessary for life.  It helps keep your blood and nerve cells healthy, and helps make DNA.  It helps prevent megaloblastic anaemia too – a blood condition that makes people very weak and tired. 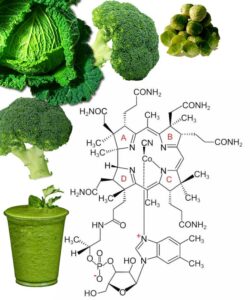 Some conditions make people more susceptible to a shortage of this essential vitamin as the body cannot store it for very long – worth considering before you commit to veganuary.  These include:

Why can’t humans make their own?

Like many herbivores, we do actually make B12 ourselves.  Unfortunately for us humans though, it’s made in the colon and leaves the body before we can use it.  Sounds like a bad design to me.  Shame we can’t Asynt-ise it! 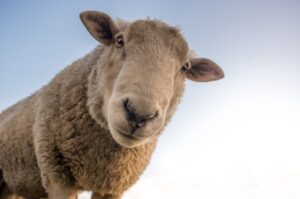 So how are the supplements made?

B12 supplements are made by allowing bacterial cultures to ferment and naturally produce vitamin B12. This is then harvested and sent off to be added to vitamins or other supplements.  The supplements are typically vegan as it is derived from bacteria but some contain inactive animal ingredients such as gelatine so you need to read the label carefully.

We hope this helps

If you’re already doing Veganuary, or thinking of giving this way of eating a go, we hope you find this information useful.