All of my life I have been fascinated by the beauty of a crisp night sky where, once your eyes are accustomed to the dark, the Milky Way appears so clearly. Light pollution, even where I live in a village in the countryside, is quite a problem for many budding astronomers trying to see the faintest of objects.

I have always hoped to see an Aurora. Crossing the Atlantic back from a conference in Boston USA a few years ago I could see the glow of the Aurora Borealis (the Northern Lights) from the plane window but that’s it. On a trip to Lapland for Father Christmas I had also hoped for an opportunity, but alas the skies were cloudy.

Life on planet Earth partly owes its longevity to the molten core and the magnetic field it generates which shields life from solar radiation and protects our atmosphere from being blown away! The sun tends to go through an 11 year cycle of sunspot and solar activity and recent activity since 1900 has been higher than any time in the past 9000 years and interestingly 9000 years ago was a warm period on earth too, but that’s another debate! This heightened solar activity blasts Earth with high energy particles, mainly protons and electrons, resulting in the ionization and excitation of the atmosphere emitting light that is visible as the Aurora. An Aurora is generally visible close to the magnetic poles of our planet, around 10 to 20 degrees away hence why so many people head to such places as Iceland to reliably witness this amazing sight.

In February 2014 on the BBC evening news it was announced that due to very strong solar activity an Aurora may be visible from the south of England, it was seen by many but I missed it… Many in the know were poised and ready for the Aurora and next time I needed to be too!

With just a little research I discovered some very useful websites and indeed, being a little bit of a tech geek (apps on my phone for many things!), twitter also proved valuable in my search for the Aurora. Links are at the bottom of this blog but the most useful for me is the Aurorawatch app on my phone which alerts you automatically if there is heightened solar activity that may make it possible to see an Aurora visible in the UK. With an amber or red alert from the app some of my photography friends have headed to the Norfolk coast (there is very little light pollution) where they spend till dawn hoping to see the Aurora.  They have had good success on one or two occasions so one evening I may join them but I have said that before from my warm cosy bed!

This summer I headed to the Isle of Skye for my holiday and stayed in a tiny village called Stein, an area known for its very clear unpolluted night sky with the hope that I may possibly get the chance to finally witness the Aurora there.

On Twitter one of the people I follow is a keen amateur astronomer and solar observer. I kept a close eye on her Twitter feed and she posted a link to the below video of a large solar flare that had just occurred on the sun, she also advised that it may take around 48 hours for its effects to be seen in the geomagnetic activity….

Around midday 48 hours later a yellow warning came from the Aurorawatch phone app indicating the possibility of an Aurora once it was dark in the North of the UK. That evening I kept an eye on the geomagnetic activity and also looked at the NOAA website it also indicated that the Aurora should be visible in the North of Scotland, the sky was clear so outside I went. It was a moonlit night so at first I could not see the Aurora but then at 9:45 it appeared to my eyes, it’s just the most amazing sight to see. I took quite a lot of photographs which I am very pleased with but they do not show the movement of the lights in the sky, one really needs to witness an Aurora for real it is very special.

Just a couple of my photographs: 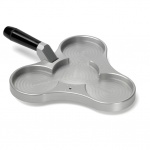 Remember though the peak for this solar cycle and activity was last year (2014) and won’t peak again for around 11 more years, so now is the time to hunt down an Aurora unless you are more patient than me!