Home » News & Media » Astronauts may be able to make cement using their own urine!

It sounds ridiculous, of course, but chemist Anna-Lena Kjøniksen and her colleagues have made a cement from urea (major component of urine) and a faux lunar soil.

Packing light for space missions isn’t just a case of a small fee for cramming too many pairs of shorts in your case; NASA estimates that for every pound of material sent into orbit around the Earth, the bill comes in at approximately $10,000.00.  Therefore it makes complete sense to pack light, and to use local resources where possible.  Obviously astronauts can’t go to the local hardware store for their concrete mix, and most cement recipes need a lot of water (which is scarce on the moon and seriously heavy for the team to take up with them) so researchers have investigated using lunar soil to make concrete or cement to 3-D print dwellings for them. 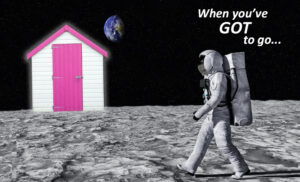 Here on earth we would add a chemical called a superplasticiser to a cement mix to reduce the amount of water needed and stop the mix being too crumbly – and flexible enough to be used in a 3-D printer.  There isn’t much of that on the moon either though…

Kjøniksen hypothesised that human waste could be useful, having previously used urea to make plastic mixtures less viscous.  It breaks hydrogen bonds between molecules, reducing friction and letting the molecules slide past one another with ease.  She decided it was worth trying in cement.

So far, tests have proven positive but there’s a long way to go!   Do click through the link below to find out more as it makes interesting reading!

The work is a result of an Ariadna study, a joint collaborative research project between the Faculty of Engineering at Østfold University College and the Advanced Concepts Team of the European Space Agency.