Gunpowder or black powder was invented in China by alchemists experimenting with a naturally-occurring salt, potassium nitrate, also known as saltpeter. Ironically, they were looking for an elixir of immortality. But in handling and heating the sensitive substance they inevitably discovered its explosive properties. The first known account of the use of gunpowder as a weapon dates to 1046 in China, describing a catapult-launched grenade, an incendiary bomb, and a smoke bomb. The Song Dynasty Emperor in 1067 banned the sale of saltpeter and sulfur to foreigners and nationalized the production of gunpowder.

Marco Polo is sometimes given credit for bringing gunpowder to Europe but that is unlikely. When Europeans invaded the Middle East during the Crusades, they encountered gunpowder weapons used by Moslem forces. Despite government control and attempts to keep the formula secret, gunpowder probably traveled the Silk Road from China to the Moslem world far earlier than Marco Polo’s trip in the late 1200s. English philosopher Roger Bacon (1217-1292) is believed to the first Westerner to describe gunpowder and fireworks. By the mid-1300s, European armies were using crude cannons and other gunpowder weapons.

It seems rather ironic that we then follow a path to where this substance is used to create vivid paintings with brightly coloured lights through the night sky!

Fireworks are used so frequently today in celebrations that it is easy to forget that they are dangerous explosives. Every year more than 8,000 people in the U.S. suffer injuries caused by the personal use of fireworks. Nearly half of the victims are children. A third of the injuries are caused by illegally obtained fireworks, and burns account for half the injuries. (An ordinary sparkler burns at a temperature of more than 1000°C!) The National Council on Fireworks Safety has valuable information on how to safely and responsibly handle consumer fireworks.  Safety is paramount to us here at Asynt and we’re always looking at ways to offer any possible additional safety benefits to our customers; whether it’s automatically including heat resistant handles with all our DrySyn heating bases or offering safety screens, filtration cabinets or even lab coats!

So – the cool bit – the colours!  The colours are produced by heating metal salts, such as calcium chloride or sodium nitrate, that emit characteristic colours. The atoms of each element absorb energy and release it as light of specific colours. The energy absorbed by an atom rearranges its electrons from their lowest-energy state, called the ground state, up to a higher-energy state, called an excited state. The excess energy of the excited state is emitted as light, as the electrons descend to lower-energy states, and ultimately, the ground state. The amount of energy emitted is characteristic of the element, and the amount of energy determines the colour of the light emitted. For example, when sodium nitrate is heated, the electrons of the sodium atoms absorb heat energy and become excited. This high-energy excited state does not last for long, and the excited electrons of the sodium atom quickly release their energy, about 200 kJ/mol, which is the energy of yellow light. 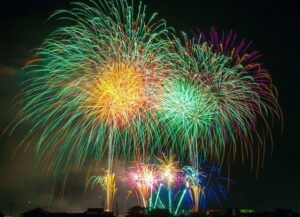